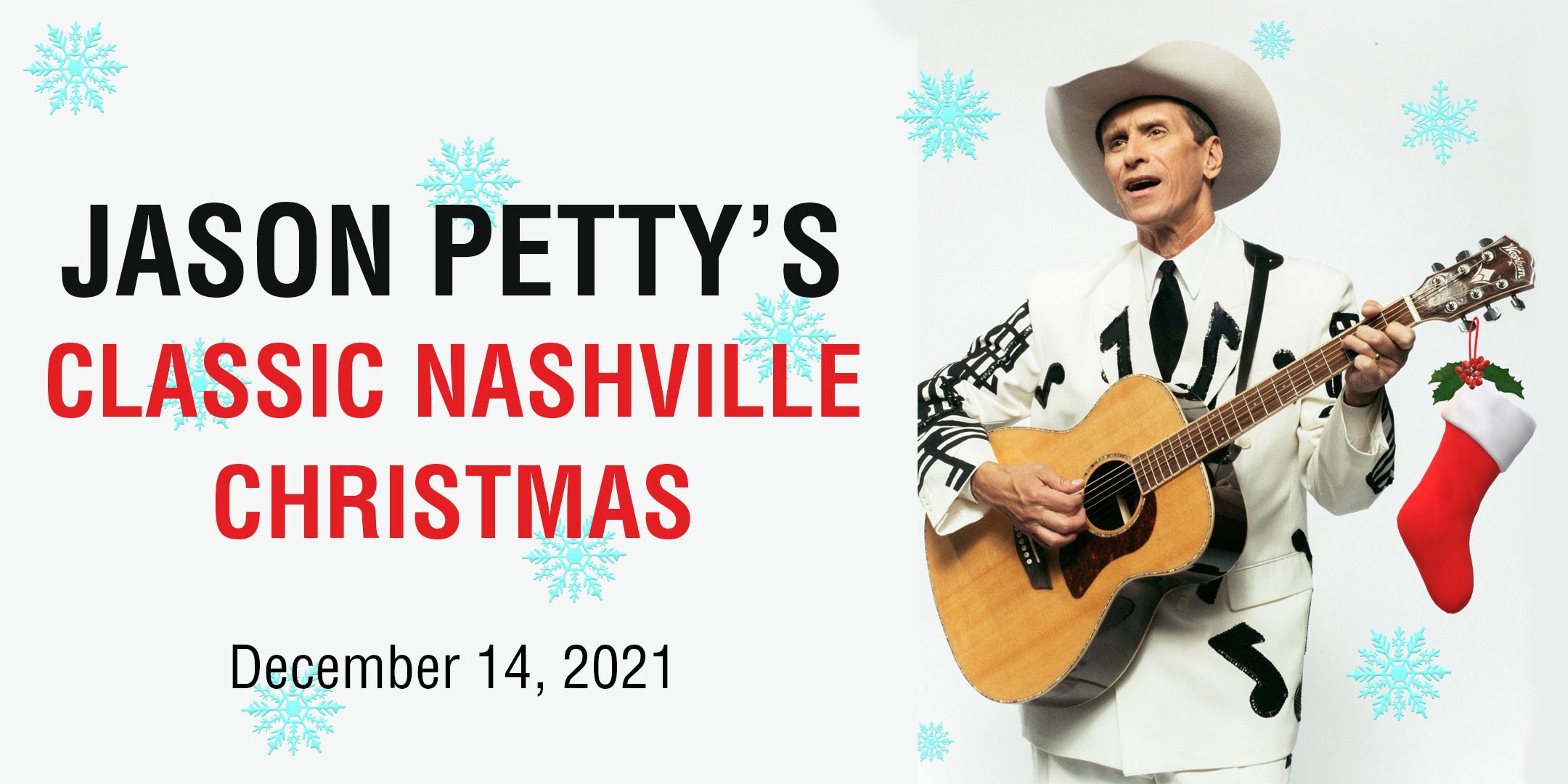 It's The Most Wonderful Time Of The Year... Country Music Style! Jason Petty and his Classic Nashville Christmas cast bring you the greatest collection of country holiday songs and the stories behind them….From Grandpa Jones to Alan Jackson and Brenda Lee to Elvis Presley, Classic Nashville Christmas and Jason's style of personable storytelling blended with humor and heart will delight your audience and invite them to take a step back in time!

Jason Petty has always been a country soul. Born and raised in the small middle Tennessee town of Manchester, he began spending a lot of time on his grandparents' farm in Hickman County, TN, after his Mother's sudden passing when he was only 7. On this farm, he began tending fields and helping raise and take care of the livestock. This is where he learned what was important in life...family. He attended church with his grandparents where the entire membership numbered 18. These people were earthly, grounded, faithful people who loved music as part of their lives. Gospel and country music became a part of the fabric of their lives and it became deeply important to Jason as well. His Grandmother, Fannie Mayberry, would swing on the front porch and shell peas while singing 'Blessed Assurance.' His Grandfather, Dan, let him ride on the tractor with him while plowing and would sing Hank Williams' songs to him.

The very first song Jason remembers hearing is when his Dad, James Petty, sang 'Hey Good Lookin' to him on a car ride back home from visiting his grandparent's house. Jason was hooked. After high school graduation from Coffee County Central High in Manchester, Jason attended and graduated from the University of Tennessee in Knoxville. He began his career in business, working for a pharmaceutical company for 3 years...until the music bug bit him. He had been singing in the church choir when one of his fellow choir members told him he should audition for Opryland in Nashville. Jason did and the rest, they say, is history.

​While at Opryland, Jason was asked to perform on the Grand Ole Opry and was first introduced onto that hallowed stage by the King Of Country Music, Roy Acuff. In the fall of 1995, Jason was asked to do a reading of a play about Hank Williams for the Ryman Auditorium. Jason had been portraying Williams at Opryland in a show called 'Country Music USA.' After the reading, the executives hired Jason on the spot and 'Lost Highway' ran for 2 years at the Ryman Auditorium, which is the former home of the Grand Ole Opry. During this two-year run, Jason met and became friends with many of Williams old musicians and friends. It was while at the Ryman that Jason would meet and fall in love with his wife, Hope.

After a national tour and a few regional theatre productions of 'Lost Highway', Jason connected with Randy Myler, original co-writer of 'Lost Highway' and they became friends. Myler was ready for 'Lost Highway' to go to New York City and in 2002, it began a 6 week run Off-Broadway. The reviews were off the charts and the run was extended for another 7 months. Jason won the coveted Obie Award for his portrayal of Hank. The Obie is the Off-Broadway equivalent of the Tony Award.

​After completing 7 straight years of touring with 'Lost Highway', Jason decided to write a show based upon all the people he met and befriended who knew Hank. Some of those included Grand Ole Opry stars, musicians and friends, and the family of Williams. That first show was 'Hank and My Honky Tonk Heroes.' Jason has gathered many stories and was asked to write a book...but decided to write shows honoring those grand legends of country music and their songs. It has become his life's calling to do so and will continue until they drag him off the stage. Jason currently has seven shows touring about the history of country music and he believes that the stories behind the artists and songs are just as important as the songs themselves. He believes it gives the audience a greater appreciation and admiration for the artists and their impact on people's lives. He harkens back to his grandparent's farm in his memory while on stage and tries to bring that sense of family to all his shows.

​Jason and Hope now reside back in Jason's hometown of Manchester, TN, where they are raising 2 children...a daughter, Loralei, and a son, James. They often travel to Daddy's shows and are sometimes even coaxed onto the stage so Jason can show them off. Jason's grandparents and Dad have gone on to be with the Father of Creation, but are still very much a part of his daily life and his onstage performances.