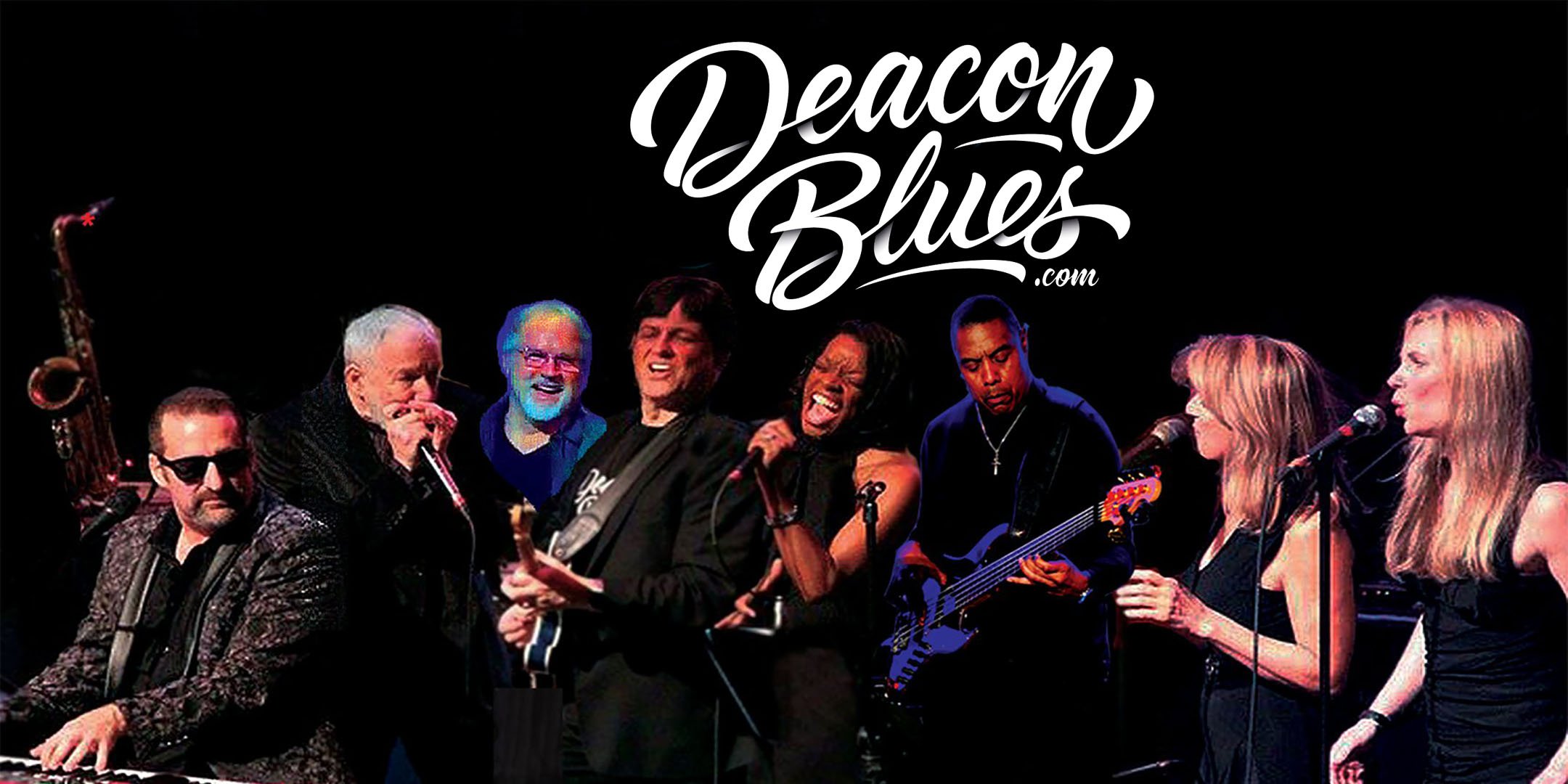 DEACON BLUES are twelve stellar musicians, composers, and educators–-collectively known as The Deacons–– who share a unique passion for the Becker/Fagen repository, better known to the world as Steely Dan. Deacon Blues has consistently played to sold-out audiences nationwide. In the words of legendary Chicago FM Radio personality Bob Stroud, “If you are a Dan fan, you owe it to yourself to see Deacon Blues. They’ve got all the right musicians with all the right chops – they are an incredible tribute to the music of Steely Dan!”

Meet the Members of Deacon Blues

Steven Kikoen | Guitars/Vocals
Steve is the founder and creative shaman of DEACON BLUES. The genesis of The Deacons began when Steve, Jon, and Cash formed an original jazz/rock collective known as BEBOP DADDYS. The Daddy's featured the renowned rhythm section of Tom Mendel (bass) and Tom Hipskind (drums). You can catch Daddys fan Donald Fagen on many Steely Dan live-YouTube videos sporting his very own Bebop Daddys Tee! Steve additionally leads the progressive rock group MASTERWORKS, as well as the original "band within the band" - "The Deacons." As guitarist and vocalist of Deacon Blues, Steve is also a composer, arranger, and youth choir director - having worked with Steve Howe and Jon Anderson of YES. Forthcoming projects include collaborations with friends Howard Levy, Peter Gabriel, and Paul Simon. Ever a Beatles fan, Steve cites Donald Fagen & Walter Becker, Larry Carlton, Peter Gabriel, Steve Howe, Jon Anderson, and Carlos Santana as friends and influences.

Thomas Linsk | Rhodes & Acoustic Piano/Vocals
Thomas started playing piano at the age of seven. His passion and talent led him to embark on a musical journey and career. Thomas spent his early years in Las Vegas, NV, inspired and influenced by the great performers of the time. After stints in St. Louis and Miami, he relocated to Chicago where his musical career flourished. Whether Tom is with Deacon Blues, his trio, quartet, big band or simply performing solo he is regarded as one of Chicago's finest entertainers. Thomas has performed along with Lisa McClowry at the Redhead Piano Bar, as well as many other nightclubs in the Chicago area. In addition, Tom has not only performed at special events for Oprah Winfrey and other Chicago area celebrities but all over the United States. He has traveled from one coast to the other entertaining people for over 25 yrs. Thomas cites everyone from Donald Fagen to Boz Skaggs to Stephen Schwartz to Billy Joel among his influencers.

Richard Patterson | Bass
Richard is a legend in Chicago. He had performed with Miles Davis, Michael McDonald, Boz Scaggs, and Aretha Franklin, just to name a few! Richard is the first call bassist for recording sessions in Chicago and is also currently a member of the Santana Tribute Lotus Kings featuring Steven Kikoen and Cecy Santana called Lotus Kings. Richard is also a member of the original group known as Wertico, Kikoen, Patterson, & Lewis – which is an original group releasing its first album in 2022, very much in the same musical landscape as the Pat Metheny Group and Weather Report.

Tom Hipskind | Drums
Tom has been playing drums for well over 30 years. He received his undergraduate degree in jazz performance at Northern Illinois University, where he played with the NIU Jazz Ensemble and accompanied many jazz legends for three years, before doing graduate work at DePaul University and taking residence in the Chicago area. He has performed, recorded, and toured extensively with many artists, such as Howard Levy, Kenny Werner, Patricia Barber, Fred Simon, Kimo Williams’ Kimotion, Heather Headley, Gary Sinise’s Lt. Dan Band, John Elmquist's HardArt Groop, and many others. Tom is a highly-regarded studio musician, having recorded on dozens of TV and radio commercials, film soundtracks, and record dates. He’s also found a home in Broadway-style pit orchestras, performing on Chicago-based productions of “The Lion King”, “Shrek”, “Dirty Dancing”, "Annie" and "The Book Of Mormon". Since 2004, Tom has been adjunct faculty in the music department at Columbia College Chicago, teaching private lessons and classes. Tom cites Peter Erskine and Vinnie Colliauta as influences.

Ben 'Jammin' Johnson | Drums
Ben ‘Jammin’ Johnson started playing drums at the age of three. He studied at The University of Arkansas and Roosevelt University and was featured in their marching, concert and jazz bands, and he completed his undergraduate work. Ben is one of the busiest drummers in Chicago and beyond. He has performed and recorded with Freddy Hubbard, Nelson Rangell, Phil Perry, Jean Carne, Michael Henderson, Ray Parker Jr., Williams, and the Mongolian pop group Sweetymotion. Mr. Johnson has performed with Edgar Gabriel’s StringFusion since 2010. In 2015, Ben has the distinguished experience to perform along with the legendary Mr. Bernard "Pretty" Purdie at a Deacon Blues theatre gig. The 2 drummers absolutely 'killed it' as they 'brought down the house' with thunderous applause, paying homage to the Becker/Fagen catalog.

Victor Garcia | Trumpet & Fligelhorn
Victor is a first-call trumpet and flugelhorn player in Chicago. By the time he left for college at the University of Illinois at Urbana-Champaign, Victor had begun playing with various Latin bands, including Ricky Luis (singer of N’Klabe of Universal Records), Angel Melendez & the 911 Mambo Orchestra, Johnny Rodriguez’s Latin Inspiration, and Papo Santiago & Infraverde. While at UIUC, Garcia studied with classical luminaries Ron Romm of the Canadian Brass, the late, great Dr. Michael Ewald, and jazz saxophone master Ron Bridgewater. He subsequently transferred to Northern Illinois University due to an increasingly busy schedule in Chicago. There he studied with Dr. Mark Ponzo and jazz trumpet master Art Davis. Victor cites his professors at the U of I/Champagne-Urbana as tremendous mentors.

Henry Salgado | Trombone
Trombonist Henry Salgado established himself on the Chicago scene while working on his Jazz Studies degree at DePaul University. He began subbing in the pit orchestras of the Goodman Theatre, Marriott Lincolnshire, and the Drury Lane Oakbrook. Salgado has also performed with many top entertainers including Josh Groban, Aretha Franklin, Sister Sledge, Frankie Valli, Kurt Elling, Johnny Mathis, Mel Torme, Rita Moreno, Della Reese, and the Doc Severinsen Orchestra. As a studio musician Henry has recorded over 100 Radio & TV commercials and has playing credits on these original movie soundtracks; Big Night, Imposters, Secret Lives of Dentists and Hamlet directed by Cambell Scott. More info on IMDB.COM. Henry Salgado is currently a member of the Chicago Jazz Philharmonic Orchestra and recorded on its debut CD "Collective Creativity".

Rich Lapka | Trombone
Rich Lapka is a native of Chicago who has played in many bands over the years. After graduating from Northern Illinois University where he played lead trombone in the acclaimed NIU Jazz Ensemble, he formed the Jazz Fusion group Jugular. From 1979-1991 Juggular played throughout the Midwest at clubs and festivals and their 1980 record Balls was played around the country and are currently available on iTunes. Rich has also played with the Pete Special Band, The Deja Vu Big Band, Bill O'Connell's Chicago Skyliners Big Band, the Pocket Fisherman, and many other Chicago bands. Currently, besides having a blast playing in Contrabanda, Rich plays with the Jazz Consortium Big Band and the Reunion Jazz Orchestra.

Candice Marie | Vocals
This fiery R&B vocal powerhouse will blow you away with her range and contemporary finesse. Bridging the decades with a rich soulfulness that is modern and timeless, Candice channels Rihanna, Christina Aguilera, and Aretha Franklin. Candice is the winner of the 2011 Budweiser Superfest Vocal Competition and her hit single “I Wanna Go” recently made its national debut on Chicago’s V103. She has opened for a variety of artists such as Jill Scott, R. Kelly, Josh Groban, and Chico DeBarge. Candice is currently in production on her first solo album.

Suzanne Cross | Vocals
Suzanne’s voice is a powerhouse, often compared to Chrissie Hynde of The Pretenders. Able to sing in a huge variety of styles, she also sang with the Chicago Symphony Chorus for four seasons. A music therapist by day (and Steely Dan fan at night!) - Suzanne is equally at home singing lead or harmonizing with “the girls!” Ever a Tony Levin fan, Suzanne cites Donald Fagen & Walter Becker, Peter Gabriel, Chrissie Hynde, K.D.Lang, Chaka Khan, and Kiri Tekanawa as influences.

Taylor Yacktman | Vocals
As a follow-up to her recently released EP “Dare You To Love Me,” Sashé has recently completed a 6-week tour promoting her new CD, including an extended stay in China. Many successful and sold-out shows later, she is currently working with Grammy-nominated producer ‘Oh Hush.” Sashé has been featured in a T-Mobile Commercial, as a principal dancer in the feature film (and Bollywood hit) Dhoom 3, appeared on several television series including Chicago Fire, Underemployed, and Mob Doctor, and has been having featured in the films Grand Piano and Johnson. Sashé has hosted a web series called My LiveTicket where she would go behind-the-scenes with bands as they shoot their concerts live. Sashé cites Donald Fagen & Walter Becker, Aretha Franklin, Tina Turner, Stevie Wonder, Michael Jackson, Christina Aguilera, Hall & Oates, and Elvis Presley as influences.

Jennifer Hall | Vocals
Jennifer is a phenomenal Chicago songstress. And a tremendous singer as well. The Jennifer Hall band is actively releasing original material and is consistently touring the United States, including gigs in Hawaii. Welcome, Jennifer - our newest 'Deacon.'