The Romance of Dance is an exciting, high energy, historical show featuring a female vocalist Nancy Hays, dance champions and a live band. The Romance of Dance takes the audience on an entertaining journey through the eras of ballroom dance in America from the turn of the century through the modern day "Dancing with Stars". Highlights include the Charleston, the Lindy Hop, the Big Band era, the Golden Age of Hollywood, the Fabulous 50s and 60s, Disco, the Latin Craze and ballroom dance competitions of the 21st century. Award-winning dancers thrill the audience with their dazzling moves and elaborate costumes while educating the audience about music and dance history! 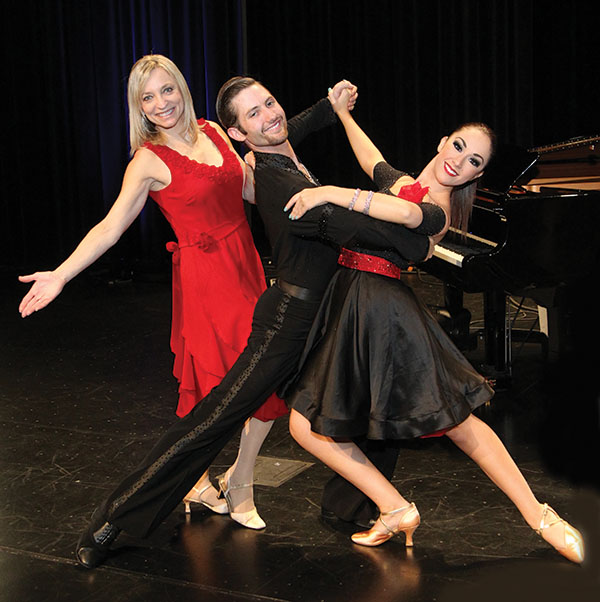 Nancy Hays is a professional singer, dancer, actor, and entertainer. Nancy has worked as an opening act for major artists including Conway Twitty, Lee Greenwood, George Burns, Ronnie Milsap, Glen Campbell, Danny Thomas, Rita Rudner, The Smothers Brothers, Marty Stuart, Dan Seals, the Bellamy Brothers, Crystal Gayle, Barbara Mandrell, Kenny Rogers and many more. Nancy is a successful recording artist who has recorded five albums and made multiple DVDs and toured the UK four times with her own original music since 2000. Nancy’s country music song “Come Dance with Me” (with choreography by Jo Thompson) is an international hit and was named one of the most popular line dance songs in the world by multiple publications in Europe and the United States.  The song was also nominated for the Crystal Boot Award in the UK.

Nancy began her professional performing career playing the role of Dorothy in the Wizard of Oz at the Little Theatre on the Square as a teenager. Nancy worked as a singer and dancer at Six Flags over Mid-America and at Opryland USA in Nashville, Tennessee.

After her first season at Opryland USA, Nancy was hired by Opryland to join a special elite cast that performed in Hawaii and Las Vegas and made a television show. Nancy sang demos for Nashville songwriters, wrote and recorded her own music and appeared on popular shows in Nashville including the WSM Waking Crew and the Nashville Noon Show as well as other shows on TNN during her 20s.  Nancy graduated from the University of Illinois in Champaign Urbana with a degree in Advertising as a Bronze Tablet Scholar (top 3 percent) and also holds a Master’s Degree from the Medill School of Journalism at Northwestern University.

While continuing to sing country music with her band, Nancy Hays & the Sawyer Brothers, Nancy began singing big band music in the 1990s at the Willowbrook Ballroom with the Bobby Benson Orchestra. During this same period, she also appeared in the Nashville North country music club, the Country Music Inn and at State Fairs and Festivals. During this time, Nancy began recording music specifically for dancers and developed her own ballroom and line dance series of DVDs and CDs featuring music she was performing for her live audiences.  Her series “The Romance of Dance” drew national attention and her products were featured in an infomercial on Fit TV and on various shopping networks. As a sought after dance instructor and entertainer, Nancy was hired to make appearances on TV shows on ABC, the Discovery Channel, Fox, WGN, Wild Chicago and others. Her products also were reviewed favorably by The Washington Post, the LA Times, The Chicago Tribune, the Las Vegas Sun, Variety, Billboard and many other publications. On NBC Nancy taught Mario Lopez, Danny Bonaduce, and David Cassidy how to Salsa with style. ​

Following media success of “The Romance of Dance”, Nancy was hired to perform her own ballroom show in Las Vegas with the full Caesar’s Palace Orchestra in the Circus Maximus Showroom.  Nancy is one of the only act’s in Caesar’s history to stage her show with the audience dancing along with her concert in that venue.