The Johnny Rogers Show – Buddy & Beyond, the History of Rock ‘n Roll

An encore performance for the most-requested returning show from last year, Johnny Rogers pays tribute to such artist as Buddy Holly, Elvis, Roy Orbison, Jerry Lee Lewis, and many more, bringing yesteryear's music and history of Rock 'n' Roll to life. Johnny captures the spirit, freewheeling excitement and thrilling sounds of an era. 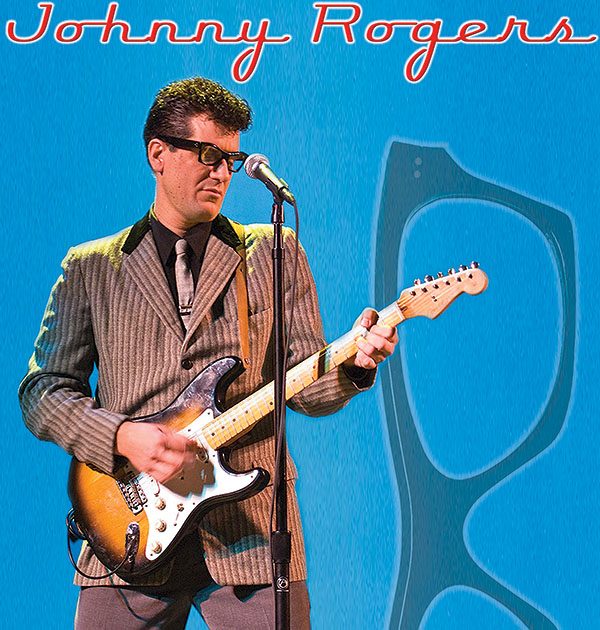 Johnny Rogers was born in Jackson, Tennessee to parents who were born in the southern states of Kentucky and Tennessee. His father was a radio personality in the late '40s and early '50s, who crossed paths with some of the biggest legends of music history: Elvis, Johnny Cash, Hank Williams Sr., George Jones, Lefty Frizzell, Marty Robbins, and Conway Twitty, to mention a few.

When he was very young his father gave him his first guitar. He had no interest in playing until he heard Buddy Holly for the first time. The song was Rave On. He said it was like someone or something turned a switch on inside of him. From that moment on he knew what he wanted to be in life and that was someone like Buddy. His father showed him a few basic chords. That was all he needed to get started playing.

While Johnny was in high school, he tried starting his own band, but finding kids his own age with the same taste in music seemed to be impossible. So, he began to look for older guys that grew up listening to the music. He started sneaking into the honky-tonks with his father’s help and a fake ID. But he wasn't there to drink he was there to learn about becoming an entertainer.

Johnny's father was very good friends with a Chicago honky-tonk legend by the name of Jimmy Nichols. Johnny's father had given Jimmy his start in the late '50s and now Jimmy would return the favor. Johnny started playing lead guitar for Jimmy Nichols at the age of 15. He was self-taught and learned all styles of music. Johnny made his debut on stage at the Off-Broadway Lounge. Immediately he was a big draw. People would come from miles around to see the kid with horn-rim glasses and lightning guitar licks. Johnny continued playing guitar for the Chicago legend until he was 21 and it was time to start his own band and his own show.