Called “Beyond Fabulous” by Chicago WFMT, Beckie Menzie & Tom Michael come to Freedom Hall with their brand new 2019 show “Re-Imagine The Beatles.” Celebrating their 20th anniversary as a duo, the award-winning Chicago-based concert artists are thrilled to explore the songs and inside stories of The Fab Four, the most phenomenal music group in history. They cleverly re-imagine more than 25 of the beloved songs of The Beatles, including “Eleanor Rigby”, “Yesterday,” “Come Together,” and “The Fool on the Hill.” Joining them on percussion will be Irwin Berkowitz. 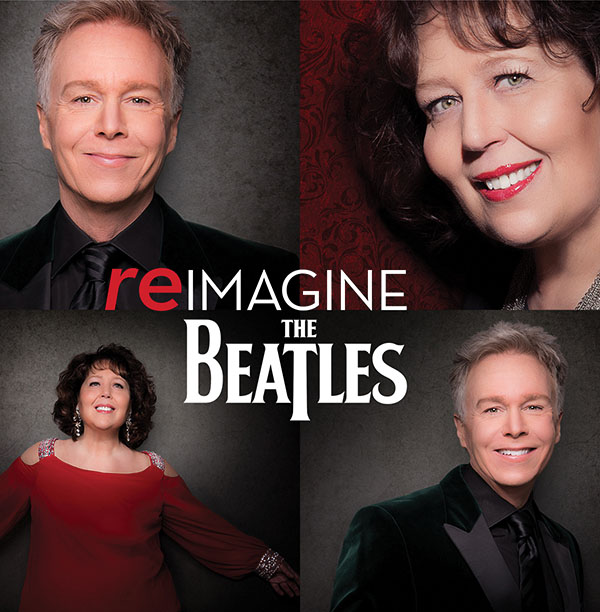 About Re-Imagine the Beatles Cast: Beckie Menzie and Tom Michael

One of cabaret’s most in-demand duos, Beckie Menzie and Tom Michael offer a unique blend of whimsy, nostalgia and unquestionable talent that translates into pure entertainment. Their imaginative musical twists on jazz favorites, standards, contemporary pop, Broadway show tunes and film gems, have won them an audience and critical acclaim across the country and around the globe.

Hailed by Cabaret Scenes Magazine as one of the “Top Ten Cabaret Acts,” Menzie & Michael have appeared on some of the country’s most prestigious stages, including New York’s Carnegie Hall and Lincoln Center and Chicago’s Auditorium Theatre. They have headlined with the Chicago Chamber Orchestra and both the Danville and Racine Symphonies, as well as others. Beckie and Tom served as regional judges and mentors for the Michael Feinstein Initiative, which promotes the music of the Great American Songbook to high school student. Their recording efforts have been praised by Billboard Magazine, BackStage, Show Business Weekly and Playbill and their latest CD, “Better Two-gether,” was hailed by critics as “magic,” “sensational,” and “…the year’s best recording.”

In what they call a “musical marriage,” Menzie & Michael delight audiences with their rare chemistry, inventive arrangements and genuine love for music and for one another.

Menzie’s rich voice and expert piano stylings sizzle on everything from sassy swing to smoky torch songs. She is a three-time winner of After Dark Chicago’s “Outstanding Cabaret Artist” award, the Chicago Gold Coast Cabaret Award winner and The Chicago Tribune called her “indispensable to Chicago Cabaret.” Beckie was featured in Michael Feinstein’s “Now & Then” Series for her Carnegie Hall debut and has two critically-acclaimed CDs, teaches Master classes around the country and is an Artistic Associate of Porchlight Music Theatre.

With a voice that Billboard Magazine describes as, “…a revelation,” Michael’s warm, expressive style and charismatic tenor breathe new life into cabaret standards and reveal why BackStage Magazine has called him “one of the most striking singers to emerge in the last few years.” His most current solo CD, “Written in the Stars,” received international critical praise and was named “Best CD of the Year” by ShowBusiness Weekly Magazine, After Dark Chicago and WDVR-FM radio.

Together, their playful, passionate performances produce what critics have called “sizzling,” “pure brilliance,” and “cabaret at its best!”