Billy Branch & the Sons of Blues with Dee Alexander

Alligator Records Recording Artist, Billy Branch, was discovered by Willie Dixon, the "father of modern Chicago Blues” and began touring with the Willie Dixon Chicago AllStars. Billy has played on over 150 different recordings, including 12 under his own name and received three Grammy nominations. His internationally recognized “Blues in Schools Program,” is committed to teaching both young and old about the Blues as the roots of America's music.

Dee Alexander is one of Chicago’s most gifted and respected female vocalist/songwriters. Her talents span every music genre, from Gospel to R&B, from Blues to Neo-Soul and Jazz. Alexander boasts long and fruitful associations with Chicago’s jazz elite; including Ramsey Lewis, Orbert Davis, Nicole Mitchell, and more. She received the Chicagoan of the Year Jazz award and the 3Arts Award for Music. 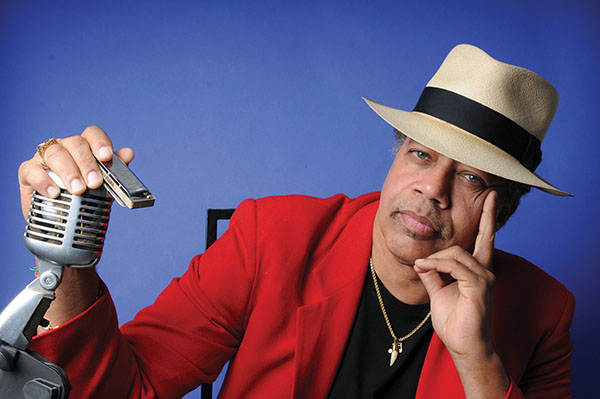 Billy  Branch was discovered by Willie Dixon, the "father of modern Chicago  Blues," while Billy was still in college. Willie encouraged Billy to finish  his college education, which he did, but instead of going to law school after  receiving his political science degree,
​
Billy began touring with the Willie  Dixon Chicago All-Stars. This gave Billy the unique opportunity to travel and work as an understudy for the legendary Carey Bell who was planning to leave the All-Stars and form his own band. When Carey took his leave, the young Billy  Branch took his place, touring with Willie Dixon for 6 years.

Since those early days, Billy has played on over 300 different recordings including 15 albums under his own name.  Billy has recorded with Willie Dixon, Johnny Winter, Keb' Mo, Lou Rawls, Koko Taylor, Eddy Clearwater, Honeyboy Edwards, Syl Johnson, Lurrie Bell, Ronnie Baker Brooks, John Primer, and Taj Mahal, just to name a few.  Billy has three Grammy Award nominations, having lost one nomination to BB King and Eric Clapton!  He served two consecutive terms on the NARAS Grammy Board of Governors and founded the First Grammy Blues Committee.  Because Billy's Blues credentials include dozens of years spent working side-by-side with many of Chicago's illustrious Blues musicians of years gone by, he is considered an ambassador of Chicago Blues.  In that role he has written the forwards to three books, given numerous U.S. State Department cultural exchanges in other countries, presented keynote speeches (one was for the Obama Foundation), and presented to the leaders of Turkey's Parliament, teaching them to play the harmonica! Billy also does commercial voice-overs and has acted in two major big-screen movies.

Billy Branch and The Sons of Blues (SOBs) celebrated their fortieth anniversary by headlining the 2017 Chicago Blues Festival.  They kept tens of thousands of Blues fans thoroughly engaged for over two hours.  It's hard to imagine that the SOBs very first gig was in Germany at the 1977 Berlin Jazz Festival.  Over the many years since, Billy Branch and The Sons of Blues have consistently delivered the Blues to fans around the world.  During their six week tour of Turkey, thousands of fans showed up every night of the week to experience authentic Chicago Blues.  The Sons of Blues have made over 250 international tours, sharing the cultural legacy of the Blues around the world.

Billy Branch is a Blues education pioneer.  He was one of the first artists to develop a Blues in Schools curriculum.  Since 1978, in addition to recording and performing, he has taught hundreds of thousands of children around the world.  His internationally recognized Blues in Schools Program is committed to teaching students of all ages about the Blues as the roots of America's music.  He has shared his interdisciplinary program in Europe, South America, Australis, Asia, and in Mexico where he taught his two-week program in Spanish.  In addition, he has taught in the Grammy Museum Music Revolution Project and lectured at the University of Chicago and other institutions of higher learning.

Born on Chicago’s west side, Dee Alexander is one of Chicago’s most gifted and respected female vocalist/songwriters. Her talents span every music genre, from Gospel to R&B, from Blues to Neo-Soul. Yet her true heart and soul are experienced in their purest form through her performance of Jazz music. From a soft, sultry ballad to a scat-filled romp; Dee Alexander delivers each style with a passion for music that comes across in every note, and a grace that is truly her own.

Her Jazz Institute of Chicago commissioned tribute to Nina Simone and Dinah Washington entitled “Sirens of Song” introduced her to a larger audience and marked the beginning of worldwide recognition. The Millennium Park performance on the Pritzker Pavilion stage also began a period of frequent European touring. Ms. Alexander boasts long and fruitful associations with Chicago’s jazz elite; including Ramsey Lewis, Orbert Davis, Nicole Mitchell, Chicago Jazz Orchestra, and the Association for the Advancement of Creative Musicians (AACM). She leads her own Dee Alexander Quartet and the Evolution Ensemble whose music ranges from original compositions to renditions of James Brown and Jimi Hendrix.

Alexander received the Chicagoan of the Year Jazz award and the 3Arts Award for Music. Her CD "Wild is the Wind" was named the album of the summer in France, earned her top votes in Downbeat’s reader's and Critics polls; received 5 stars in Downbeat and was chosen as one of its top ten recordings in the first decade of the new millennium. Her performance at the 2013 Newport Jazz Festival was selected by the NY Times as one of the best concerts with staying power. She has garnered accolades in African, Australian, European and North American press.

Dee’s current project, “Songs My Mother Loves” has received rave reviews and is intended not only to express thanks and pay tribute to Dee's mother for her inspiration and influence but also to pay homage to the music that has become such a significant part of her life.

Alexander is currently a Host on the WFMT Jazz Radio Network.