About the Chamber Blues

Few can claim to have forged an entirely original genre of music. In 1966, Corky Siegel did just that with the help of world renown Classical Maestro Seiji Ozawa who came into a famed Chicago Blues club discovered the blues harmonica virtuoso and suggested a collaboration. Guiding the blues of Howlin’ Wolf and Muddy Waters out of the smoky cavern of Big John’s and onto the stages of the Chicago Symphony, New York Philharmonic and beyond, the harmonica-playing mad scientist had the tuxedo-and-gown crowd on its feet, clamoring for more of this blues-classical alchemy. These days, the harmonica virtuoso and composer is continent-hopping with Indian percussion and string quartet in Corky Siegel’s Chamber Blues, continuing to bring classical and blues fans shoulder-to-shoulder, and obliterating musical categorization in the process.

Chamber Blues is celebrating more than 30 years of performances that have brought this original genre to great success, all with returns, at the prestigious Aspen Music Festival, Canada’s Banff Centre, and the Montreal International Jazz Festival, France’s premier Blues Festival, Blues Sur Seine, The Grand Teton Music Festival, tours throughout Mexico in palatial concert venues, Hawaiian, U.S. and British Virgin Islands, and the great concert halls throughout the United States such as Chicago’s Symphony Center.

In a city brimming with classic blues and jazz divas, Lynne Jordan stands apart. Not only do her soaring vocals dip effortlessly into blues, jazz, funk, rock, and even country but her bawdy personality wins over any crowd. Her talent so dazzled the Second City that the late Chicago film critic Roger Ebert declared her his “favorite diva.” Jordan has developed into a Chicago institution, playing jazz and blues clubs, swanky lounges and even the charity circuit throughout the country. She brought her special brand of storytelling, raw humor, and performance to New York and Atlanta with her sold-out show, “A Musical Tribute To Nina Simone.” 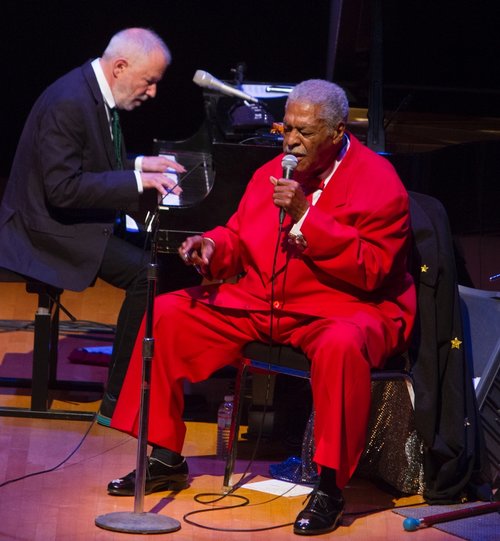 Recognized as much for his signature double-shuffle beat as for his sartorial style — his capes, crowns, canes, and cowbells are the stuff of legend. Sam has played a key role in the evolution of the blues for almost 60 years. A free spirit whose musical innovation, unmistakable groove, and explosive power helped create the blueprint for Chicago blues, Sam has earned his place in the Blues, Jazz and Rock and Roll Halls of Fame. He continues to write, record, and perform today.

“Gritty Chicago blues and rarefied classical chamber music might not seem like a match made in heaven – until you’ve heard Corky Siegel bring the two together … a crowning achievement.”
– CHICAGO TRIBUNE

Tickets for Corky Siegel are $35 and can be purchased at Freedom Hall, by phone at 708-747-0580 or online. Freedom Hall is located at 410 Lakewood Boulevard in Park Forest, IL.

If you would like more information about the Freedom Hall Series, please call Chuck Sabey at 708-747-0580 or e-mail Chuck at csabey@vopf.com