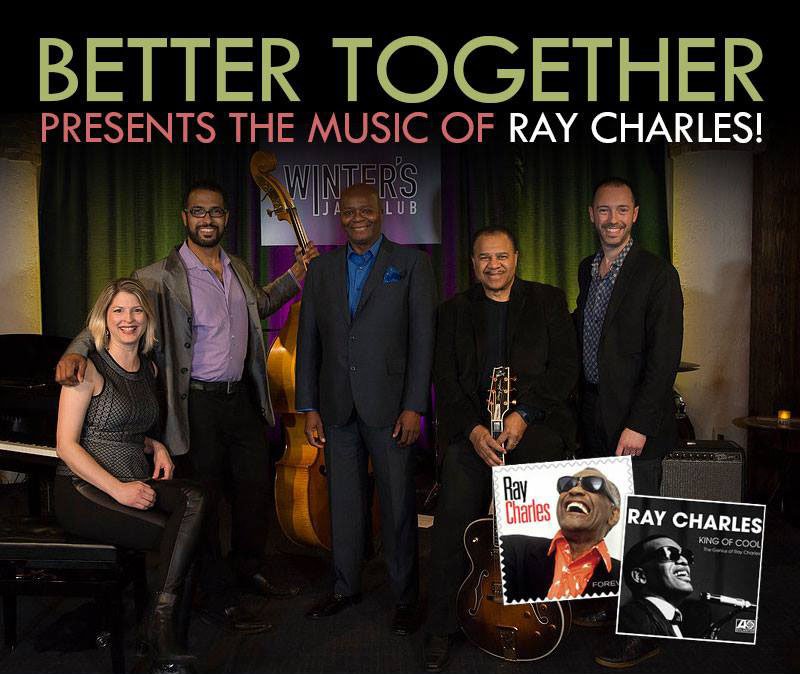 Better Together presents the Jazz Soul of Ray Charles on Friday, February 25 at 7:30 p.m. Featuring Bruce A. Henry (vocals), Henry Johnson (guitar and vocals), Jo Ann Daugherty (piano), Joshua Ramos (acoustic bass), and Ryan Bennett (drums), the band taps into the universal power of music to bring people together during these times when we need it so.

It all started with a crazy idea: wouldn’t it be fun to gather some of Chicago’s most versatile musicians to play the amazing and complex music of Al Jarreau? Not just a “tribute,” but an approach that treated these tunes as living, breathing pieces of music? That show, The Jazz Soul of Al Jarreau, became a hit of Freedom Hall’s 2019 series. That’s how this like-minded yet diverse group of musical souls found themselves together on a journey that has evolved to meet the need for positivity in the world, for events that unite people of different backgrounds around amazing music, and for the dissemination of good vibes all around. And now they’ve turned their attention and talents to the catalog of Ray Charles, right at the intersection of jazz and soul.

Join Better Together for their latest show, The Jazz Soul of Ray Charles—a night of music guaranteed to move your soul and your feet!

Jo Ann Daugherty has performed in jazz festivals and clubs throughout the U.S. and abroad (Chicago Jazz Fest, Satchmo Fest in New Orleans, Jazz at Lincoln Center-Shanghai, Dizzy’s NYC, Snug Harbor, the Jazz Showcase, Green Mill, Winters Jazz Club, Andy’s and many more), as well as in premier Chicago productions as West Side Story and Jesus Christ Superstar at the Lyric Opera. As a music director, she played throughout the US as conductor of the Jersey Boys national touring company and holds the honor of being the first woman in Motown history to conduct the orchestra (touring with the show Motown: The Musical). In addition, she has produced the music for two live PBS concert specials with the vocal group Under the Streetlamp and most recently played piano and music-supervised for To the Ends of the Earth, a PBS wildlife documentary featuring narration by Jane Goodall.

Joshua Ramos makes a busy career out of teaching music at various locations and performing. He has been on television numerous times in the United States Europe and Central America. He has opened for Stevie Wonder, Spyro Gyra, and Vernon Reid with Liquid Soul. With the Occidental Brothers band he has performed at the Lincoln Center, Kennedy Center the Montreal, and Toronto Jazz Festivals he has shared the bill with Cindy Blackman, Lonnie Plaxico, Ben Allison, Vijay Ayer, Jason Moran, Andrew Byrd, and many others.

Ryan Bennett is a drummer, percussionist, and teacher in the Chicago area. He is an in-demand performer in many styles of music. He played drums in the hit Broadway show Jersey Boys, both the Chicago production and national touring company. Other performances of note include shows with pop songstress Tori Amos, trumpeter Randy Brecker, and guitarist John Abercrombie. Ryan has performed at clubs and festival venues at home and abroad and has toured extensively throughout the US. He has appeared on three PBS specials playing drumset and percussion.

Tickets to Better Together presents the Jazz Soul of Ray Charles are $30. They are available online, in person, or by calling our box office at 708.747.0580.