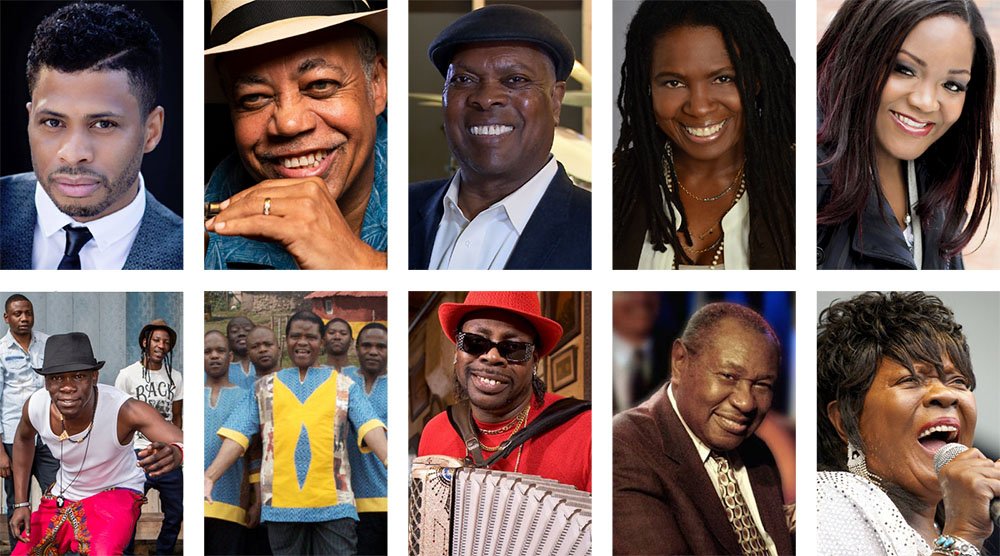 Chester’s television appearances include performances on The Daily Show, The View, and The Tony Awards. As a recording artist, Gregory, also known as CHΞSS, has collaborated with industry greats including Phil Collins, Marc Shaiman, Ledisi, and Chance the Rapper. Studio recordings include multiple singles, Original Broadway Cast recordings, and his album In Search of High Love. He is the recipient of Chicago’s Jeff Award, the NAACP Theatre Award, the key to the city of his hometown of Gary, Indiana, as well as an honorary Doctorate Degree from Columbia College Chicago. Chester’s last performance at Freedom Hall was in 2021.

Billy Branch is an American blues harmonica player and singer of Chicago blues. Billy has played on over 300 different recordings including 15 albums under his own name. Billy has recorded with Willie Dixon, Johnny Winter, Keb’ Mo, Lou Rawls, Koko Taylor, Eddy Clearwater, Honeyboy Edwards, Syl Johnson, Lurrie Bell, Ronnie Baker Brooks, John Primer, and Taj Mahal, just to name a few. Branch is a three-time Grammy nominee, a retired two-term governor of the Chicago Grammy Chapter, an Emmy Award winner, and a winner of the Addy Award. In addition, he has received numerous humanitarian and music awards.

Billy Branch is a pioneer in Blues education. He was one of the first artists to develop a Blues in Schools curriculum. He’s taught hundreds of thousands of children around the world. His internationally recognized Blues in Schools Program is committed to teaching students of all ages about the Blues as the roots of America’s music. Billy’s last performance at Freedom Hall was in 2020.

Booker T. Jones is an American multi-instrumentalist, songwriter, record producer, and arranger, best known as the frontman of the band Booker T. & the M.G.’s whose first recording, “Green Onions,” was an international sensation, selling more than one million copies and winning a place among Rolling Stone’s top five hundred songs of all time. From an early age, Booker T. Jones—“one of the legends of soul music” (The New Yorker)—was captivated by the magic of melody, rhythm, and harmony. Nearly five decades after he first made his entrance onto the scene, Jones paved the way for modern soul music and is largely responsible for the genre’s rise and enduring popularity. His musical legacy includes enduring compositions such as “Time Is Tight,” “Hip Hug-Her,” and the often sampled “Melting Pot” and collaborations with the likes of Otis Redding, Wilson Pickett, and Sam and Dave—and later Neil Young, Bob Dylan, Barbra Streisand, Carlos Santana, and Willie Nelson.

He has also worked in the studios with many well-known artists of the 20th and 21st centuries, earning him a Grammy Award for Lifetime Achievement. Along with the band, he was inducted into the Rock and Roll Hall of Fame in 1992. Jones continues to record and tour internationally, both as a solo artist and as head of Booker T.’s His last performance at Freedom Hall was in 2019.

Ruthie Foster is an American singer-songwriter of blues and folk music. She mixes a wide palette of American song forms, from gospel and blues to jazz, folk, and soul. She has often been compared to Bonnie Raitt and Aretha Franklin. Foster’s awards include three Grammy nominations (Let It Burn for Best Blues Album, The Truth According to Ruthie Foster for Best Contemporary Blues Album, and Promise of a Brand New Day for Best Blues Album), seven Blues Music Awards, including three awards for Best Female Vocalist and one for DVD of the Year for Live At Antone’s, and Foster’s crown for Best Female Vocalist at the Austin Music Awards. She was nominated for two Living Blues Awards and won the Koko Taylor Award for Best Traditional Female Blues Artist. She received the Grand Prix du Disque award from the Académie Charles-Cros in France, a Living Blues Critics’ Award for Female Blues Artist of the Year, and the title of an “inspiring American Artist” as a United States Artists 2018 Fellow. Her list of honors also includes a nomination from the Living Blues Awards for Best Live Performer. Ruthie’s last performance at Freedom Hall was in 2019.

Shemekia Copeland is an American electric blues vocalist who has released ten albums and been presented with seven Blues Music Awards. She has performed thousands of gigs at clubs, festivals, and concert halls all over the world, and has appeared in films, on national television, NPR, and in magazines and newspapers. She’s sung with Eric Clapton, Bonnie Raitt, Keith Richards, Carlos Santana, Dr. John, James Cotton, and many others. She opened for The Rolling Stones and entertained U.S. troops in Iraq and Kuwait. Jeff Beck calls her “amazing.” Santana says, “She’s incandescent…a diamond.” In 2012, she performed with B.B. King, Mick Jagger, Buddy Guy, Trombone Shorty, Gary Clark, Jr., and others at the White House for President and Mrs. Obama. She has performed on PBS’s Austin City Limits and was recently the subject of a six-minute feature on the PBS News Hour. Currently, Copeland can be heard hosting her own popular daily blues radio show on SiriusXM’s Bluesville. Shemekia’s last performance at Freedom Hall was in 2019.

Mokoomba is a Zimbabwean musical group, originally from Chinotimba Township, Victoria Falls, Zimbabwe. The group sings in a number of languages including English, Luvale, Tonga, Nyanja, Ndebele, and Shona. Mokoomba takes its name from a Tonga word that connotes deep respect for the Zambezi River and the vibrant life along its banks.

In 2017 Mokoomba toured Luyando internationally, making stops at the Jazz and Heritage Festival in New Orleans, LA, The Kennedy Center in Washington, D.C., Norway’s Førde Festival, Canada’s Edmonton Folk Festival, and the Nuits d’Afrique festival in Montreal, CA. In 2018 they made their debut at the SXSW Festival in Austin, TX, and were nominated for a Songlines Award. They were also inducted into the Afropop Worldwide Hall of Fame at a ceremony honoring the 30th anniversary of the Peabody Award-Winning media organization Afropop Worldwide. Later in 2018, Mokoomba performed at Freedom Hall.

Ladysmith Black Mambazo is a South African male choral group singing in the local vocal styles of isicathamiya and mbube. They became known internationally after singing with Paul Simon on his 1986 album Graceland, and have won multiple awards, including five Grammy Awards, dedicating their fifth Grammy to the late former President Nelson Mandela.

Over the years, they also collaborated with Dolly Parton, Josh Groban, Emmylou Harris, and more; the group appeared in the Michael Jackson film Moonwalker. In 1993, they accompanied Nelson Mandela to his Nobel peace prize ceremony in Oslo. Their theme for England’s 1995 Rugby World Cup campaign, a version of Swing Low, Sweet Chariot, reached No 15 in the UK singles charts, and a 1998 best-of compilation album reached No 2. They performed at Freedom Hall in 2017.

C.J. Chenier is the son of the great King of Zydeco, Clifton Chenier. His earliest musical influences were an eclectic mix of funk, soul, jazz, and Motown, and his first musical instruments were piano, tenor saxophone, and flute. In 1987, Chenier followed in his father’s footsteps and led the legendary Red Hot Louisiana band as an accordion performer and singer of zydeco, a blend of cajun and creole music. With five previous albums to his credit, by 1994, Chenier began to record for Chicago-based Alligator Records.

Today, C.J. continues to record and rack up honors and awards. This year, he is being honored along with his late friend, Clifford Antone, in the acclaimed Museum of the Gulf Coast’s Music Hall of Fame in the Golden Triangle; where he will join the likes of Janis Joplin, Tex Ritter, Percy Sledge, George Jones, Marcia Ball, Johnny Winter, The Big Bopper, ZZ Top and, of course, his father, Clifton Chenier. C.J.’s last performance at Freedom Hall was in 2015.

Freddy Cole was an American jazz singer and pianist whose recording career spanned almost 70 years. He was the brother of musicians Nat King Cole, Eddie Cole, and Ike Cole, father of Lionel Cole, and uncle of Natalie Cole and Carole Cole. He bore a vague physical resemblance and an uncanny musical resemblance to his brother, particularly in his velvety vocal delivery. Freddy was the more erudite brother, studying at the Juilliard School and the New England Conservatory in contrast to Nat’s high-school dropout status.

Cole was inducted into the Georgia Music Hall of Fame in 2007. His 2010 album, Freddy Cole Sings Mr. B, was nominated for the Grammy in the category Best Jazz Vocal Album. Later that year, Cole performed live on the Jerry Lewis MDA Telethon. His 2018 album, My Mood is You was also nominated for a Grammy for Best Jazz Vocal Album. Freddy Cole performed at Freedom Hall in 2013.

KoKo Taylor was an American singer whose style encompassed Chicago blues, electric blues, rhythm and blues, and soul-blues. She was known worldwide as the “Queen of the Blues”. She won her 29th Blues Music Award (for Traditional Female Blues Artist of The Year), making her the recipient of more Blues Music Awards than any other artist. In 2004 she received the NEA National Heritage Fellowship Award, which is among the highest honors given to an American artist. She won a Grammy in 1984 for her guest appearance on the compilation album Blues Explosion on Atlantic.

Over the course of her 40-plus-year career, Taylor received every award the blues world has to offer. On March 3, 1993, Chicago Mayor Richard M. Daley honored Taylor with a “Legend of The Year” Award and declared “Koko Taylor Day” throughout Chicago. In 1997, she was inducted into the Blues Foundation’s Hall of Fame. A year later, Chicago Magazine named her “Chicagoan of The Year” and, in 1999, Taylor received the Blues Foundation’s Lifetime Achievement Award. In 2009 Taylor performed in Washington, D.C. at The Kennedy Center Honors honoring Morgan Freeman. Koko performed several times at Freedom Hall. Her last performance was in 2005.